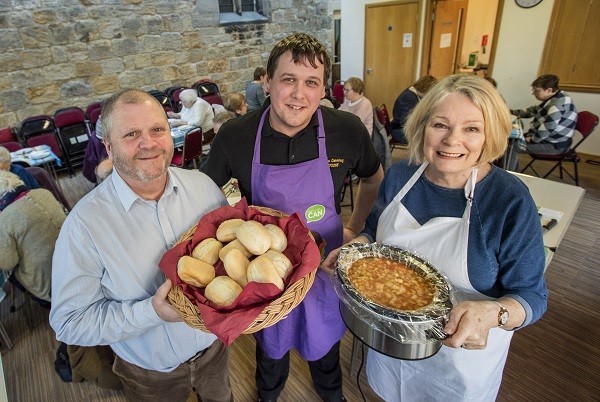 The village of Longframlington near Morpeth held its inaugural St Mary’s Church Warm Hub lunch in January and had the honour of hosting the launch of a national competition run by Northern Gas Networks to find the best slow cooker recipe.

The new hub is offering residents a hot meal, a friendly welcome, an opportunity to meet friends, and receive advice and information about energy safety and efficiency.

Organiser Pat Booth is hoping that this first lunch will be the start of a popular monthly event; particularly for village residents who don’t socialise as much as they would like to.

“We are a small village, but even so there are some people who enjoy company but who perhaps don’t get out as much as they used to. The Warm Hub lunch will give them a nourishing meal and an afternoon of good company, and I hope that in future it will prove to be a valued part of village life.”

She has worked closely with and been supported by CAN, which shared invaluable advice with her about recruiting and training volunteers and promoting the Warm Hub to people who might be interested.

Local award-winning chef Michael Hall, who runs The Granby Inn in the village, has created a slow cooker recipe, a Moroccan vegetarian stew, to mark the launch of a new national slow cooker recipe competition run by Northern Gas Networks, the North of England’s gas distributor.

The competition will be open to anyone, and entrants just need to create a slow cooker recipe that is nutritious, good value for money and easy to prepare. It will run from 27 January to 28 February.

More details about the competition and how to enter

Entries will be judged by Michael and Tom Bell, the Head of Head of Social Strategy at Northern Gas Networks, who said:

“Warm Hubs are playing a big part in helping rural communities across Northumberland, and I am delighted that Northern Gas Networks has been able to support the creation of the first 12 and still successful projects in the county.”

Northern Gas Networks and CAN launched the award-winning Warm Hubs programme, funded by Northern Gas Networks, in 2015 following a pilot the previous year. The programme, which is now self-sustaining, gives residents in rural, off-grid locations access to friendly, warm places, run by volunteers, where they can go to socialise, enjoy refreshments and have access to services including energy efficiency advice.

Together, they have launched the new Pop-Up Hubs Project, a series of one-off Warm Hub events in the more isolated areas of Northumberland where very often there is a lack of existing services for communities who may not be connected to the gas network. More than 8,000 residents use the Warm Hubs throughout the year.

The Pop-Ups focus on the benefits of slow cookers as a low-cost, easy-to-use way of cooking hot, healthy meals. Savings of up to 63p an hour can be made by using a slow cooker instead of a traditional cooker, which can make a huge difference to many householders. Warm Hubs also offer information on tariffs, the Priority Services Register and the Warm Homes discount, which are some of the ways Northern Gas Networks supports people across the region.

More information about the competition is at www.northerngasnetworks.co.uk